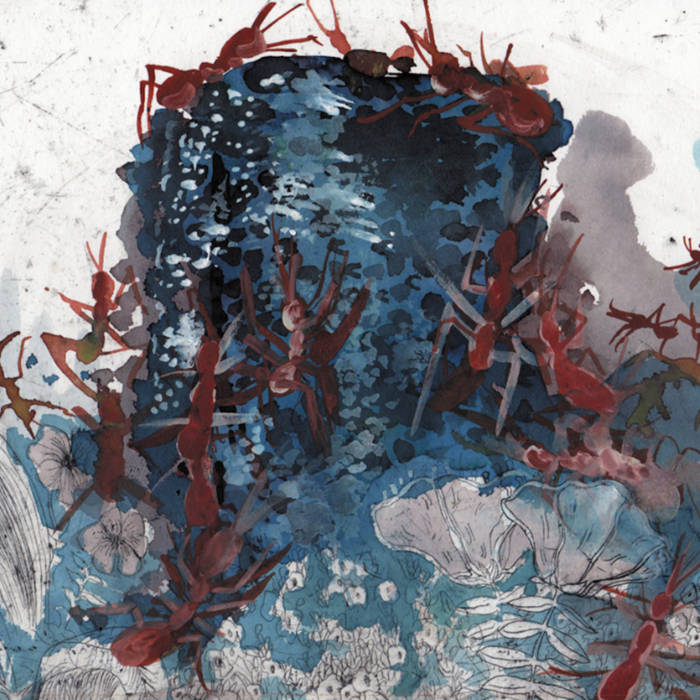 *Taken From feedingtuberecords.com
An incredible album of music, conjoining two different sonic aspects of Maine’s Strangeness. Big Blood are well known to fanciers of contemporary sub-underground sounds. The duo of Colleen Kinsella and Caleb Mulkerin have been conjuring up rural-experimental ghosts for over a decade. Feeding Tube has previously released their double LP set, Radio Valkyrie (FTR 103) to rapturous acclaim. Their music embodies the mysteries of the deep woods better than any othe artist we can name.

Elliott Schwartz, meanwhile, has been composing and playing brilliant (often keyboard based) music for decades. His 1973 duo album with saxophonist Marion Brown (released by Bowdoin College, where he has been based for many years), is often cited as one of the primest examples of a free jazz/avant classical hybrid. And all of his records are quite killer.

This LP came together as the soundtrack for an exhibit called Ant Farm, organized to showcase the work of Maine-based art quartet, The Ant Girls. This visual arts group included Ms. Kinsella and the late Dorothy “Deedee” Schwartz in its ranks, so it’s perhaps is this collab less surprising than it might initially appear.

But surprising or not, the work is an incredible syncretic fusion. Although there are certain instrumental parts we might ascribe to one artist or the other, as the music unwinds these divisions melt and become all-but-imaginary. The blend of Big Blood’s psych-tinged free-folk improvisations and Schwartz’s aleatory work on keys and percussion is a ver righteous blast.

Dontrustheruin Records, specializing in low tech/hi tech handmade one of a kind art and music production.

Bandcamp Daily  your guide to the world of Bandcamp